Tips To Scan And Remove Those Nasty Viruses From Your Phone 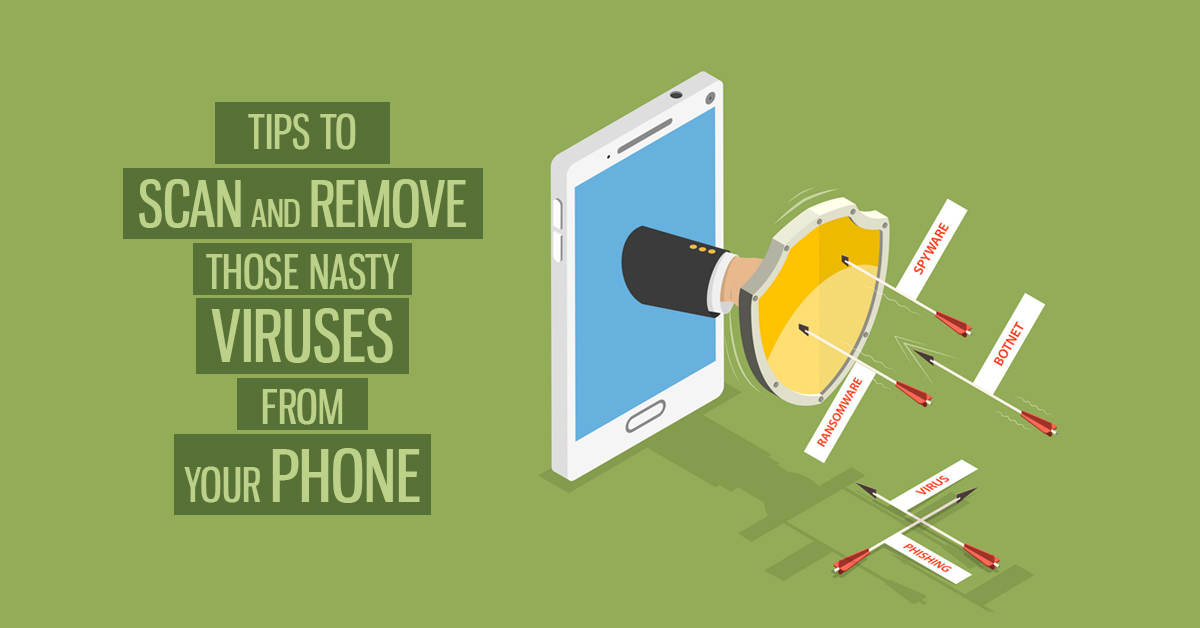 Can Phone Get Viruses?

Before we explore the possibility if mobile phones can get virus, let’s learn more about the viruses itself. We all are very well familiar with computer viruses. They are malicious programs that infect and corrupt the files present in the computer, disrupting its performance and wreaking havoc on their electronic host. The thing that distinguishes viruses from other forms of malware is their ability to replicate.

Now back to the initial question, can phone get viruses? Not in a traditional sense and luckily so far self-replicating viruses has also not made their way onto Android phones or iPhones. So, technically speaking your phone can’t get ‘virus’ because this is just the go-to term that a lot of people use to explain any kind of malicious software that may have happen to get into the device.

There are many forms of Android malware, ranging from spyware which gathers your personal data to provide it to the third party (often advertisers) to mobile ransomware, which holds your files hostage so that they can demand ransom in order for you to retrieve them. On the other hand, the story for iPhones goes this way – unlike Android, iPhone and iPad apps can only be downloaded from their official app store. So, Apple users enjoy the benefit of a secure phone as an authorised application prevents malicious software from infecting your device via fake apps.

Another advantage for iPhone or iPad users is, apps for iOS are ‘sandboxed’, meaning that they can’t access data from other apps or break into your device’s operating system (OS). If you are an Android user, don’t be gloomy because Android too sandbox their apps but their approach is less restrictive than iOS. It allows apps to obtain more control over the device. In addition to this, iOS send updates to all its devices simultaneously whereas Android is still struggling with its system update problem. Updates are vital because they often contain bug fixes or vulnerabilities found in the OS. The two major reasons Android face is, their open source system and delayed roll out of updates. This is why Android device users must download antivirus like REVE Antivirus for an added layer of protection.

Thanks to Apple’s safety precaution, it is very rare that iPhone or iPad become infected with malware. The only exception that applied to Apple users is if their device is jail broken, it allows users to download apps from sources other than the App store, thus exposing them to potential threats.

How To Tell If Your Phone Has A “Virus”

Similar to virus, malware attacks secretly. It sneaks into your smartphone and stays dormant, waiting for you to unknowingly activate it and then it quietly starts stealing sensitive information from right under your nose. As a smart person, you can be proactive and keep a look out on below-mentioned symptoms that will indicate that your device is infected.

We know how much everyone loves using the internet and with so many apps for streaming, social media, banking, games etc. it’s difficult to not use a smartphone for a long time. Whenever we have even 5 minutes of free time on our hands, we instantly boot up phones and busy ourselves. But everyone is familiar with how much data they consume every day. If you have noticed that all of a sudden there’s a spike in the data consumption, this could be a red flag indicating that a virus is running background tasks on your device or using the internet to transmit information from your phone.

Imagine a scenario where you are busy making an urgent transaction and all of a sudden the app stops. Or when you are playing your favorite game and about to beat the high score, the app stops responding. At first, we feel angry, frustrated and disappointed, thinking that the phone is no more the same as it used to be and that you might need a new one. Well, there could be another reason why such a thing is happening. If the apps on your phone have started crashing without any explanation, the virus is causing it.

Adware is one kind of malware that everyone knows when they see it. How could someone ignore it when it usually is all in your face? Most pop-ups that you get while browsing surely annoys you a lot but not all of them are malicious. Luckily, you can easily block unwanted ads by using an ad block browser extension. You can also download Opera Browser app for free and it comes with a built-in ad blocker. However, after you have blocked ads and still you see them on your Android and iPhone, even after the browser is closed, this could be a sign that these malicious pop-ups caused by malware are trying to steal your data.

Phone bill is higher than usual, even when you haven’t made a lot of calls? Some malware attacks by sending premium messages from your phone. If you are thinking that you must have noticed it, well, the malware does it in such a way that it goes overlooked, causing your bill to take a hit. An Android Trojan named Ztorg popped up in Google Play. The Trojan though isn’t new but last year more than a half million Android users became infected. The purpose was to make money from the victims by secretly enrolling them in a premium-rate text message service and spamming them with ads. If you don’t want to experience the same thing, be more attentive towards your phone bill.

Time and again noticing apps that you don’t recall downloading or is of no use to you but still there on your phone? Unfamiliar apps are a common symptom of malware on Android phones. So, make a smart move, stay away from such apps and uninstall it immediately. Protect your phone as well as your personal data.

Usually, there are a number of reasons behind a faster battery drain. If your phone isn’t very old but still you need to charge it frequently in a day, malware’s mischief could be behind it. Malware when running in the background takes up a lot of energy, thus taking a toll on your Android or iPhone’s battery. Keep an eye and see whether or not the battery is draining faster than usual. If it is, don’t rule out the virus as a cause.

No one likes when their phone starts heating up. It makes the phone uncomfortable to hold and also bears the risk of exploding. When phone heats up, we instantly understand that there must be something wrong or the operating system is working too hard. In most of the cases, it is a harmless thing but it’s possible that the cause is a malware infection.

How To Remove Nasty Viruses From Android Phone?

Noticed the above-mentioned symptoms on your device? Here are a few methods that you can try to remove it.

There are a number of antivirus apps available on Google Play that you can use to remove the virus from your phone. Take a look at the steps, how you can use REVE antivirus on your Android phone and remove virus threats in real time.

Step 2: Open the app and click on the ‘scan’ button

Step 3: Wait while the app runs a full phone scan, checking files and apps for any malicious software.

Just like Windows, Android’s ‘safe mode’ turns off access to all third-party apps. This is a great way to identify malicious apps that might be behind your phone’s unusual behavior. If the problem solves as soon as you go into the safe mode, the malicious applications are to be blamed. Safe mode also enables your phone to function normally, without any interference. Many Android smartphones will prompt you to “Reboot to Safe Mode” after pressing and holding the “Power off” button while others offer a slightly complicated way.

Go to settings and click on ‘Manage app’ or a similar variation on your smartphone. Now, select the ‘downloaded’ tab and look for apps that seem suspicious. For example, apps that you don’t remember downloading or that shouldn’t be running on your phone. If you find such an app, uninstall that very moment.

Step 3: Chuck Out The Malicious App

To remove administrator access, go back to ‘settings’ and look for ‘security’ tab. There, tap on ‘Device Administrator’ and check if any malicious app have gained access. If yes, tap on the app and then ‘deactivate’ it. Now, it will be easy for you to uninstall the application.

Apparently, you just can’t stop using smartphone, right? So when you use an Android device, make sure that you are using a reliable antivirus app such REVE Antivirus for Android, that will scan your apps and remove any threats that may try to compromise your smartphone or personal information.