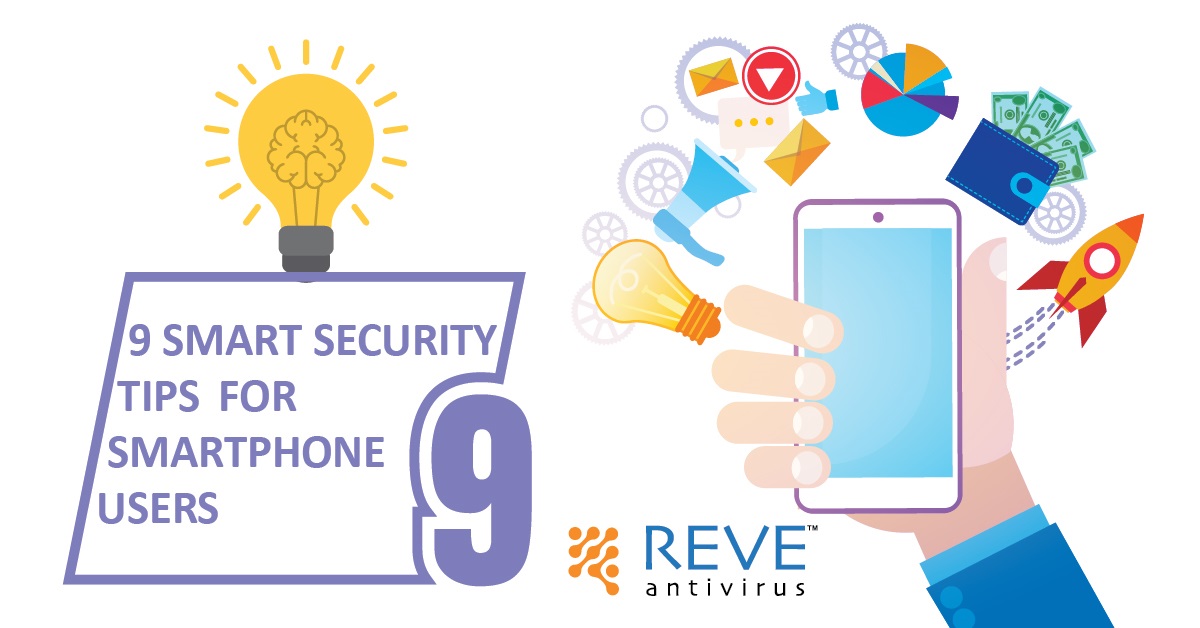 When it comes to cyber crime, the first thing that comes in our mind is protecting our computers and laptops from such criminals. What we forget during all this is that our smartphones are prone to such attacks too. We keep them with us all the time and access a lot of information via it. Now think how much information a small phone will be holding about us.

You have probably read about a lot of cases in which hackers stole sensitive information from someone’s smartphone. They gladly enjoy taking all the data from the device while we casually surf the web using free Wi-Fi at Starbucks. Luckily, smartphone security is becoming a trending topic now and there are a lot of ways through which one can keep all the data safe from prying eyes of cyber criminals. You can surf the web as much as you can while following the right safety measures. Here’s how you can stay safe.

Always Secure Your Smartphone With A Password/Passcode

The first and foremost thing every Android phone or iPhone owner should do is to secure it with a pattern lock, password or pass code. It sounds like the most obvious advice but many people completely overlook it, making it easier for people to access their phones without any issues. This simple security measure doesn’t look like much but it prevents sensitive information from being viewed by others. Our phones are no more just a device to make calls or send messages. We use it to access a lot of personal information such as emails, account details, send money, save passwords, creating a to-do list etc. To make all of these things happen, we have a bunch of apps that almost everyone knows how to use. With a pattern lock, password or passcode, your vital information stays completely safe. If you want an extra layer of protection you can also lock the apps with a different password.

Nowadays, even the emails that we receive have a lot of private information and there’s no option to secure emails through a password. With phone lock, when you are away from the phone, your sensitive data is safe and no one can snoop around your stuff. However, it is imperative that you regularly clean the screen of your smartphone. If the device gets stolen or someone gets a hold of it, they will be able to see the traces left behind you while accessing your phone. They can use it to figure out the pattern or password/passcode and easily access your personal information.

Done setting up a password or pattern lock on your phone? Great! But if it sits unlock on your desk for 10 minutes, you won’t have achieved very much. Phones are smart and come with an advantage, that is, when inactive, it can automatically lock itself but not smart enough to do this itself. You have to go to your phone settings and enable automatic lock with the shortest time that you are comfortable with. We would suggest you choose 30 seconds to 2 minutes of time instead of 10 to 30 minutes. You might find it a little inconvenient at first but when personal information is at risk, it won’t look like a big deal.

This has happened a lot of time when people are away from their phone; others try to snoop and access gallery, emails or bank details. They can easily steal information or learn passwords that they can use the other time when your phone is sitting idle while you are away. In a matter of a few minutes, you will lose vital data that can expose you to certain unpleasant situations. So why take such a risk when in a few seconds you can keep everything on your smartphone safe?

To keep your precious data protected, you must have saved it on i Cloud or Google account. This is definitely the smart thing to do. Now, if you delete those files from your smartphone, they will still be in the cloud storage that you can access any time and from anywhere. What very less people know is that people or cyber criminals can get into your i Cloud or Google account, steal a lot of data from your smartphone that you might be creating and editing over the years.

Your single Apple ID basically controls access to every single Apple service from iTunes to i Cloud to Face Time to i Message, everything that currently exists. Your Apple ID if got into the wrong hands, they can wreak havoc on your personal life that you have been storing and accessing through your iPhone, iPad or Mac. The issue is pretty much the same with Google. Your one Google account logs you into all the other Google services such as YouTube, Gmail, Google Play, Google Maps, Google Calendar, Google Photos, contacts etc. It is convenient and gives quick admittance but security becomes a major concern. Set up two-step verification for an added layer of security. It might look inconvenient but it is necessary.

Installing An App? Be Careful!

Did you know that Google recently removed around 50,000 apps that were suspected of malware? It is imperative for Android users to be careful before installing an app, as on Google Play, there won’t be a shortage of malware containing apps. The sneaky software hidden in the applications are designed in such a way to lure smartphone users into downloading and installing it. Then, it steals your data or damages your phone.

Apple phone users should also keep this advice in mind because Apple app store too has this issue though on a much lesser extent. The good thing about Apple is that they vet each application before it gets listed and is regularly on a lookout for apps that violates the store policy.

Android phones are targeted the most by malware. In 2018, there were 116.5 million attacks with a significant increase in affected users. It is okay if you don’t like using Apple devices but when using Android, you need to be careful while downloading apps. Check the reviews, testimonials, the date on which the app was listed and research about the developer as well to be sure that you are unknowingly not inviting any malware into your device.

Use An App Instead Of The Browser

As we discussed earlier, whether you are Apple device user or Android smartphone user, you should be careful when downloading an app. Another thing you must bear in mind, if you are doing banking or trading stocks on your phone, make sure that you do it via an official app rather than using the browser. Cyber bullies wait like a hawk for you to pass sensitive information from your smartphone to the internet. The moment you do it, cyber criminals get active and try their best to steal the data. Your paramount interest lies in the fact to use an official app for that particular site or company rather than opening the browser on your phone to make sensitive transactions.

Nowadays, almost every app asks for certain permissions before we download it like access to contacts, gallery, location etc. Most of us have this habit of instantly clicking on allow without even going through what the app is asking for and whether it is relevant or not. It wouldn’t have been a big deal but unfortunately, the rise in malware relating to smartphones is increasing and causing the owners a lot of distress. It is imperative to be cautious while downloading an app and paying attention to the requirements that any software requires when you install.

Be smart and don’t just click on “ok” all the time. If you can’t let go off this urge than rather click on “don’t allow”. Later, if you face difficulty in using the apps, simply go to app settings and change it to allow access. Some are legitimate requests that don’t cause any harm to your device but if a calculator asks for network access or the alarm clocks wants to read your contacts or messages, you need to be extra careful. Never ever ignore the red flags as your slight carelessness can cost you a lot.

I don’t like using free Wi-Fi, said no one ever! Surely, you can very well relate to it and understand what we are talking about. Not giving in to the temptation of using free Wi-Fi is a daunting task but when you will realise what an open network can do to your phone, you will definitely think twice before connecting your smartphone or any other device to it. Smartphones give you the freedom and ability to connect to the internet in many ways. When your phone is continually looking for wireless networks, it exposes the information about your identity and location. But who care so much about that right?

Once your phone is blindly connected to encrypted access points, it becomes vulnerable and sensitive data can easily get leaked to cyber criminals to intercept and act upon. Tell your phone to forget networks that you no longer use and also turn off the automatic Wi-Fi connection to minimize the amount of data leakage. Smartphones have become the new way of living and stores a lot of information about our personal lives. So why risk it getting into the wrong hands?

Antivirus Is A Must Have

Our smartphones are no less than a computer. Instead of booting our PC or laptop, we try to make everything happen through our phones because they are small, easy to use and always running. What we don’t remember is the fact that smartphones too require the same kind of protection against similar threats. Not only emails, now spam containing malware attachments, infected apps, links to attack sites – exploiting the weakness of operating systems are also starting to appear in phone devices. REVE Antivirus for smartphones is what you need to keep all those important files and data safe.

Report If Phone Gets Stolen

In the past few years, gadgets are one of the most stolen items, smartphones being top on the charts. Phones today looks better than ever, they are definitely expensive and stores a lot of information, making them a treasured item. A phone thief can not only sell the device at a good price but before that, can also access sensitive data from it and use it to fulfill his ulterior motives.

If your smartphone ever gets stolen, report about it before it’s too late. There’s also a stolen phone database that is shared between the major wireless carriers. Instantly report your stolen phone there so that the database can prevent anyone from connecting to it and use the data. Even if the thief tries to wipe it or replace the SIM, still it won’t allow them to activate any carriers because of the serial number present in your phone.

Follow the above mentioned tips and stay one step ahead when it comes to keeping your personal life personal. Even if your phone gets stolen or lost, these measures will at least not let anyone access data that is sensitive. Also, don’t forget to install the best antivirus on your phone so that it can do most of the work for you.